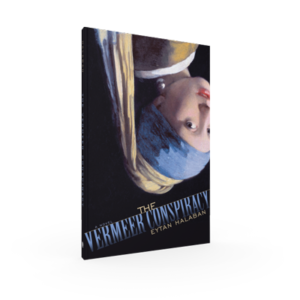 One semester before graduation, Danielle Caruthers, a Yale senior, takes a train to New York City and vanishes. No one has heard from her since—not her parents in gilded Westport, not her senior advisor, eminent art historian Whitmore Verhaast, and not her roommate, Sabrina Gutierrez.

The daughter of a single Colombian mother, Sabrina grew up on the rough side of Chicago and has been defying the odds ever since—most recently with a full scholarship to Yale. Now, as she sifts through the clues her roommate left behind, Sabrina discovers that Danielle was in hot pursuit of a centuries-old secret—the true identity of Vermeer. If Danielle’s explosive discovery is revealed, it would ruin Verhaast and expose the powerful cabal in the shadows behind him—a cabal ready to kill to keep the secret.

Obsessed with solving the mystery of her missing friend, Sabrina leaves Yale behind and risks everything to bring the truth to light. Further fueling Sabrina’s perilous mission is her own score to settle…that is, if Verhaast doesn’t get her first.

“The plot moves briskly, with a growing sense of tension, toward a satisfying conclusion. … A fine thriller that’s intriguing and clever, appreciative of art’s power, and grounded in a sensitive humanity—a winner.”