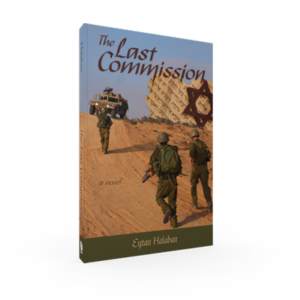 Maury Green was once a proud man. Now middle-aged, unmarried, and stuck in a dead-end job as a small-time real estate agent, he has few social prospects and fewer friends. The local Jewish community wrote him off years ago, when he slunk home to New Haven from the Israeli War of Independence, his spirit broken by the very men he tried to help.

But now, twenty-five years later, Israeli General Yaacov Ronen is passing through the city on a fundraising tour, ahead of his run for prime minister. Somehow, the nebbish Maury winds up on the guest list for a soiree in the general’s honor. When he finally meets the general, Maury sees not an Israeli hero, but the taunting smile that’s been haunting his nightmares for decades. As he soon learns, General Ronen needs someone to do a bit of dirty work, someone expendable—someone like Maury. The general promises an impressive commission—but Maury will only collect if he lives.

Maury launches a daring gambit the like of which nobody ever dreamed he could pull off: Outwit the great tactician, get even, and, in the process, regain his pride, his manhood, and the love of a wonderful woman—not to mention pocket the commission. If he survives.

It’s Maury’s chance to be a hero once more … but to whom, and at what price?
“The Last Commission is a fast-paced adventure mystery, with all of the enjoyable twists and turns to make a real ‘page-turner’ that will keep you going until the very end.”