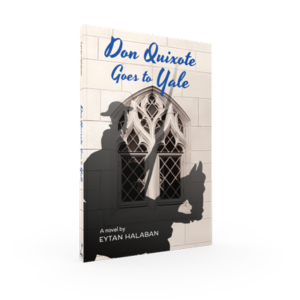 Months away from a Yale degree and blessed with a well-connected girlfriend who is hell-bent on pulling strings for him, Michael should be reveling in his good fortune. Instead, he has made a new friend, Boomie, who is, Michael discovers, a picaresque angel on his shoulder. And there is a tiny hitch to their relationship: only Michael can see and hear him.

Now Boomie hints that the literary treasure Don Quixote is also a treasure map. Abandoning his prospects for a Wall Street job, Michael drops everything to trace Cervantes through La Mancha. Whether he’s on the quest of a lifetime or merely tilting at windmills remains to be seen.

But as Michael is about to learn, he is not the only one with a secret. Powerful people at home and in Spain are watching his every move, and will do whatever it takes to silence him. With only Boomie, Cervantes, and Don Quixote to guide him, Michael will have to keep his wits about him if he wants to find the truth, keep the girl, and . . . live to see graduation.

“an enjoyable story that offers Gothic elements and archaic intrigue in a search for buried secrets the may or may not exist.”

“Don Quixote Goes to Yale is yet another savvy novel giving readers a supremely confident and engaging story. Halaban captures the elusiveness of literary understanding. But we also get a young man searching obsessively for a metaphorical and actual treasure while striving to figure out what is most valuable to him, how he is most valuable to others. Don Quixote is a literary adventure tale, one that promises much and delivers.”